TruQC to partner with Barcelona-based Grupo Otec to deliver systems to Europe, Africa and Latin America

TruQC is very excited to announce that with the addition of a sales, support and technical partner, TruQC will now be operating in Europe, Latin America and Africa. 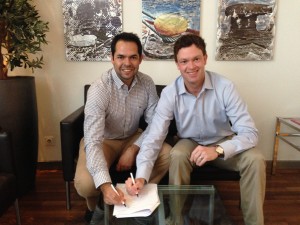 Grupo Otec, headquartered in Barcelona, Spain, will act as a partner in delivering the leading job-site documentation app for the iPad throughout Europe and beyond. The company has three main divisions involved in the research and design of various scientific and technological services. Optimiza, one of Grupo Otec’s subsidiaries, specializes in corrosion control and coatings technology.

“We are extremely happy about this partnership. We feel it shows TruQC’s commitment to solving documentation and project management issues not just in the United States, but across the globe,” said TruQC CEO Ross Boyd. “We are working on a number of initiatives, and are projected to begin delivering a uniquely European version of the app before year-end.”

Internationalization, translation and unique standard compliance development are a few of the initiatives that will receive immediate attention. Alejandro Exposito, the CEO/CTO of the Optimiza Protective and Consulting subsidiary of Grupo Otec, will head efforts to complete these developments.

In addition to also holding the position of Corporate Business Development Manager at Grupo Otec, Mr. Exposito is a NACE International instructor for CIP 1, CIP 2 and marine coatings technology courses. He brings to Optimiza more than 13 years of experience in the coatings industry.

“There is a worldwide need for higher standards of documentation in industrial coatings. TruQC has designed a tool to meet those standards and with this partnership it will be available on three additional continents,” said Exposito.