What do 5 historic bridge painting projects have in common? 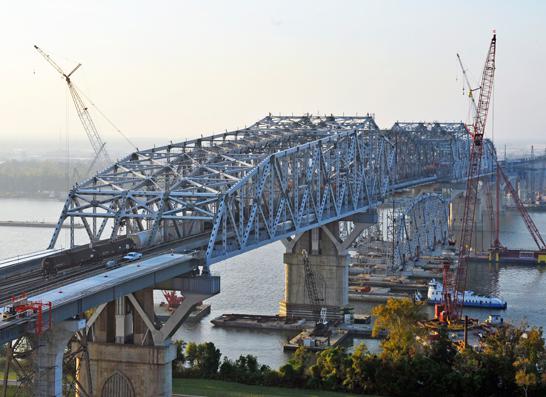 Simple – a commitment to technology. And not just the kind that comes in the form of state-of-the-art blasting and coating equipment. But in the form of the iPad and iPad apps. Historic bridges that once modernized major US cities are keeping with the modern theme for their revitalization via mobile devices.

Restoring a historic bridge to its previous luster is no small project. It’s a huge one, actually. And the larger the project, the more paperwork and documentation needed. These are bridges that not only attract world-class industrial painters, but world class scrutiny, observation and expectations.

So it’s vital that the industrial painter on the job utilizes each and every tool that can give them a distinct advantage.

Why the iPad for industrial coating quality control?

An iPad has all the power of a laptop in something small enough to fit in your pocket. Take a look at a job-site like the Eads Bridge restoration project. The painting contractor on the job is utilizing TruQC on multiple iPads for multiple duties on the job. The mounds of paperwork needed for this historic project are neatly condensed and accessible (as allowed) from each and every iPad associated with the job. Timesheet reports, expense reports, Daily Inspection Reports, Toolbox Talk reports and more are condensed and organized. Can you imagine trying to fit the old hard copies of those into your pocket? It’s tough enough to get them into the cab of your truck!

With the right tablet device and application, these documents can be updated in real time, stored securely in the cloud and made available to everyone who needs them — whether on the job-site, in the trailer or back at the home office.

The Huey P. Long Bridge in New Orleans is being managed via TruQC. This particular job is a very large, historically significant project to widen the bridge from its 1935 roots. It carries multiple lanes of car and rail traffic and still serves as the longest railroad bridge in the US.

Oddly enough, there’s another Huey P. Long bridge in Louisiana, only this one services the people of Baton Rouge. The industrial painter on that particular span is looking to TruQC and the iPad for all seven quality control and job-site documentation reports for restoration quality control.

The Maurice J. Tobin Memorial Bridge renovation project, a bridge in Massachusetts is being managed via TruQC, as is the renovation of the William Preston Lane Jr. Memorial Bay Bridge in Maryland. Both bridges were opened in the early 1950s.

These bridges, and many other historic bridges across the country, are responsible for much of the expansion in and around some of America’s great cities, like St. Louis, New Orleans and Boston. They were innovative when they were built. And now, they’re innovative in the technology they’re using for restoration. We’re proud to be one of those technologies, and thus, a part of the next chapter of great American infrastructure.